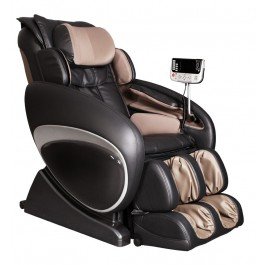 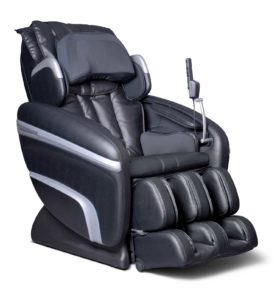 Both of these massage chairs are loaded with many advanced features. The Osaki OS-4000 and Osaki OS-6000 both have advanced infrared body scan, extra soft quad rollers, s-track design, a large selection of automatic and manual massage modes, strength and intensity settings, extensive air bag massage, and zero gravity recline.

Advanced Body Scan:
The Osaki OS-4000 and Osaki OS-6000 both have advanced body scanning. This is a feature that uses optical scanners that roll up and down your spine, measuring the width of your body and scale of the massage areas to match your exact size and shape.

Strength and Intensity Setting:
There are five levels of strength and intensity on both the Osaki OS-4000 and Osaki OS-6000. This lets the user control just how vigorously or lightly you wish to be soothed.

Air Bag Massage System:
This has become a very popular feature on massage chairs over the last couple of years. This is where the massage chairs is fitted with many air bag cells that inflate to provide a compression massage. Both the Osaki OS-4000 and Osaki OS-6000 have really extensive air bag systems. The OS-4000 is fitted with 48 air bags, and the OS-6000 has 51.

Zero Gravity Recline:
This is absolutely one of the best features of these two massage chairs. The zero gravity position is a position created by NASA and used by astronauts. This is position where you’re reclined at about 170 degrees and the seat is raised 30 degrees – your legs should be elevated above you heart. This puts you in a state of complete weightlessness and relaxation – perfect for a full body massage.

MP3 and Music System & Sync:
Another difference between the two massage chairs is the music system. The Osaki OS-4000 does not have music capability and the Osaki OS-6000 does. The Osaki OS-6000 comes with an attachment that you can plug you most music devices into. The music is then played through two high quality speakers build into the shoulder massagers. The music can also be synced with the vibration massage. This is definitely a nice feature, and it’s very easy to use.

LED Lighting – “Chromotherapy”
This is the strip of blue light that you see on the sides of the Osaki OS-6000. This is a newer feature that I have only seen on a couple of massage chairs. Both the Osaki OS-6000 and the Osaki OS-7000 have this feature, but the OS-4000 does not. So, what is Chromotherapy? This is a type of therapy that uses light in the form of color to balance the energy wherever a person may be lacking. This could be physical, emotional, spiritual or mental levels.

Price:
Then there is the price. The Osaki OS-4000 price is $2,895, and the Osaki OS-6000 price is $3,495. To get an even better price, check out emassagechair.com. They always have coupons and sales on all the Osaki Massage Chairs.

If you would like to buy or learn more about the Osaki OS-4000 massage chair or Osaki OS-6000, then visit our preferred partner at Emassagechair.com.